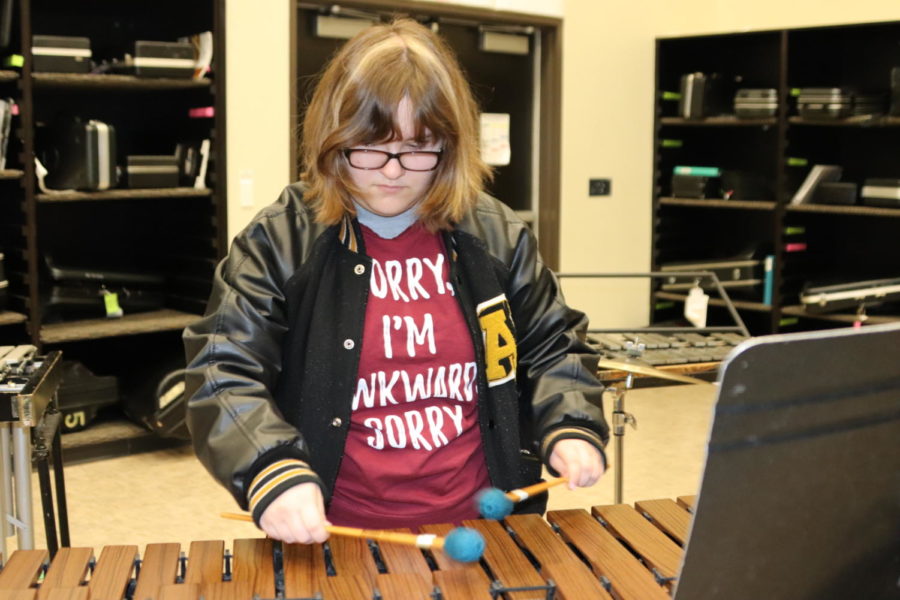 Senior Emily Richardson plays the marimba in the band hall. She is thinking about a career in music.

Emily Richardson marches to the beat of her own drum as one of the percussionists in the Prowlin’ Growlin’ Wildcat Band.

“Most of the time I play everything, from the drums to the auxilary percussion. I also keep the others on task.” said Richardson.

Band can also prepare Emily for later life skills, and can even help Emily get a job or maybe lead her to what she wants to do later in life.

“For a job, I want to repair instuments or be a set designer, since those are two good things I feel I’m good at and I’m interested in those fields” she said.

Band can also help Emily andothers who are in band to get into colleges and better jobs after highschool, which both are beneficial in general of course later on in life, for different skills, reasons, and career options in the musical niche.

“I am going to attend MSU college due to it being more local than other colleges in the state of texas.” said Richardson.  “I have visited the college on multiple occasions and I’m sure that this is the college that I want to go to”

There are multiple things to do in band besides just playing instruments of course and making music with said instruments. In band, there are contests for marching, solo, and ensemble, although marching band is usually separate from the latter two, since in marching band you have to focus on two things, being movement, and the music, but solo ensemble you only have your music, which is an advantage and a disadvantage at the same time in their own ways.

Band involves being social along with being musically inclined. These two are some of the more obvious traits that people in band may or may not have, and just because you are not musically inclined or skilled in music, does not mean you cannot do band.

“Being in band has helped me with many skills,” Richardson said. “It has even helped me with stress and to be less awkward and more social around people.”

Band also helps with many other things including teamwork, working with others, fine motorskills, and the ability to hear different tones and pinpoint what should and shouldn’t be there.

“I enjoy being able to use my weird brain power to understand the music we play by ear, which does help when we have new music, especially for solo and ensemble this year,” Richardson said.