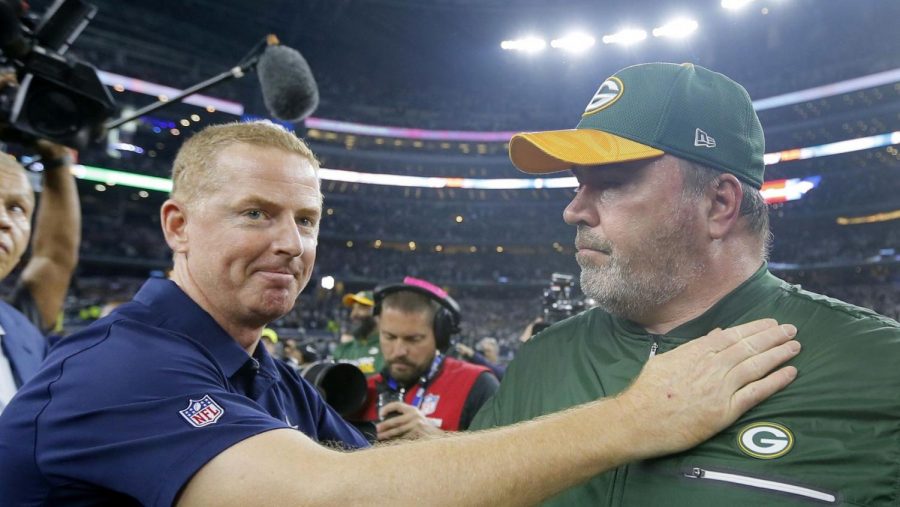 Garrett and McCarthy together after a game.

The Dallas Cowboys were in need of a new head coach. Jason Garrett, former head coach for the Cowboys, was recently replaced with Mike McCarthy.

McCarthy coached the Greenbay Packers for 13 seasons with a record of 125-77-2. In 2011 McCarthy led the Packers to a Superbowl victory.

Every fan wants their team to win a Super Bowl. The Cowboys are long overdue for an appearance. Their last Super Bowl appearance was in 1996, which they won.

Jerry Jones, owner of the Cowboys, said he has many reasons for hiring McCarthy. McCarthy has a winning record, experience coaching a Super Bowl team and a natural instinct for the game.

Jones has received praise from notable people such as Troy Aikman, who was a former quarterback for the Cowboys from 1989 to 2000, and Stephen A. Smith, sports television personality and radio host. They both agreed McCarthy was a good selection for the team.

McCarthy said that he would not shy away from using Ezekiel Elliot, Cowboys’ running back, to help the team build on their run game. A running back with the talent of Elliot is a cornerstone of the offense.

McCarthy also said he’s excited to work with Dak Prescott, quarterback for the Cowboys. Prescott has the talent to become a Hall of Fame quarterback. McCarthy can elevate Prescott’s skill set to make him an even bigger threat to a defense.

Overall, McCarthy was a great choice for the Cowboys. His experience with the Packers is exactly what they need to enhance their game. McCarthy will rebuild the Cowboys and use the talent that they’ve had stored away for years.